In 2014, the yellow-billed cuckoo (YBCU) was federally listed as threatened by the U.S. Fish and Wildlife Service. 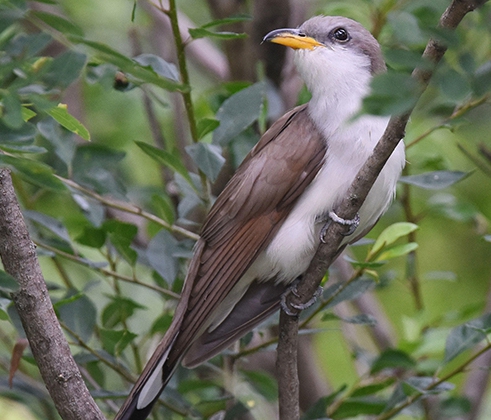 The YBCU is a fairly large, slim, long-tailed bird, which is sometimes confused with a dove. The species is about 12 inches long and weighs about 60 grams. The upper part of its long tail is greyish brown and the lower part is marked with six white spots against a black background. The YBCU’s thick, downcurved bill is mostly yellow and almost as long as its head. The bird’s head and back is a warm brown color, which contrasts its clean whitish underparts. The YBCU’s dark face mask is paired with a yellow eye ring. Key markers to look for when identifying the species are the six white spots on its tail and the large reddish brown patches on its wings, which are visible when it takes flight. YBCU males, females, and juveniles have similar plumage, although the males have a more distinct pattern of white spots. Although most songbirds have a three-forward and one-backward pointing toe arrangement, the YBCU has zygodactyl feet (two toes forward and two toes backward). The species is often hidden behind dense foliage, but can be detected by its loud Kowlp call ka ka k aka ka kow kow kow kowlp kowlp.

The YBCU breeds in low- to moderate-elevation native forests that line the rivers and streams of Western U.S. The bird requires relatively large (>20 hectares) patches of riparian habitat with multilayered canopies for nesting. The migration and wintering habitat needs of the YBCU are not well known. The species arrives on breeding grounds typically in early to mid-June. During the breeding season, they tend to move around rather than defend nest territories. The breeding cycle proceeds quickly and may last only 17 days from egg-laying to fledging. The females lay 1–5 eggs, which hatch in 9–11 days. Nestlings begin to fledge at 6-9 days old. The species’ diet consists of caterpillars, cicadas, katydids, and other insects. The YBCU also preys on frogs and lizards, and will eat fruit and seeds more frequently on wintering grounds.

The historical range of the YBCU included Arizona, California, Colorado, Idaho, Montana, Nevada, New Mexico, Oregon, Texas, Utah, Washington, and Wyoming. The Western and Eastern populations of the YBCU are separated by the Rocky Mountains. Although the Western YBCU no longer occurs in much of its historic range, it still breeds rarely and locally along rivers in Arizona, California, and New Mexico, before wintering in South America.

Although the number of both Western and Eastern yellow-billed cuckoos has declined, the Western population has diminished drastically. The Western YBCU has disappeared entirely from British Columbia and the Pacific Northwest. In California, the number of pairs was found to be only 30–33 in 1986–1987, compared to the estimated 15,000 pairs in the late nineteenth century. Surveys in Arizona also indicated that less than 200 pairs remained in the state by 1986. In 2014, the U.S. Fish and Wildlife Service listed the Western YBCU as threatened under the Endangered Species Act. Loss and degradation of native riparian habitat due to residential development, ground-water pumping, nonnative plant invasions, and other factors have played a major role in the decline of the species.

In 2020, the MRGESCP included recovery of the YBCU in its long-term goals. Signatories of the MRGESCP have conducted studies, monitoring, surveys, habitat restoration, and nonnative species removal to benefit the Western YBCU. Please reference the MRGESCP FY18 Annual Report for additional information on activities regarding the YBCU.