In 1999, the Pecos sunflower was federally listed as threatened by the U.S. Fish and Wildlife Service. The species is also listed as endangered under the New Mexico Endangered Plant Species Act. 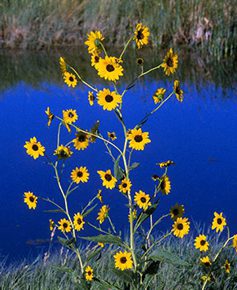 The Pecos sunflower is a herbaceous plant that blooms annually, grows 1–3 meters tall, and is branched at the top. The lower part of the plant’s stem has leaves that are opposite one another, while higher up the stem, the leaves become alternate. The stem and leaves of the Pecos sunflower have a few short, stiff hairs but are mostly hairless. The plant’s leaves are a narrow teardrop shape and usually grow to between 7–15 centimeters long. The plant has three prominent and roughly parallel veins that run from the base of its leaves towards their tips. The flower heads of the Pecos sunflower have bright yellow petals with dark purplish brown centers. These heads occur 3–5 per branch and are 5–7 centimeters in diameter. Although the Pecos sunflower can resemble the common sunflower (Helianthus annuus), it can be distinguished by its narrower leaves, fewer hairs, smaller flower heads, and narrower bracts (phyllaries) around the base of the heads.

The Pecos sunflower blooms from August to November. The species is a wetland plant that thrives in permanently wet soils. Most commonly, the plant grows in areas where desert springs and seeps form wet meadows called cienagas. Cienagas typically have a high salt content but the Pecos sunflower is saline-tolerant. The species requires open areas that are not shaded by taller vegetation. Although the Pecos sunflower has a highly disjunct distribution, little variation in phenotype between populations has been observed. One known exception is a mutation within the Bitter Lakes population in southeastern New Mexico. Within this population, there are small patches of sunflowers that produce bright red petals with yellow tips. The Pecos sunflower re-establishes populations of adult plants each year, and is dependent on seeds produced during the previous year. The plants grow in crowded patches of dozens up to thousands of individuals.

The Pecos sunflower is completely dependent on water-saturated soil conditions, and a population can disappear if a wetland habitat dries out permanently. In fact, there is evidence that the plant’s associated habitats, i.e. spring seeps and desert cienagas, have historically been reduced or eliminated by aquifer depletion, agricultural activities, and encroachment by nonnative plants. The Pecos sunflower is currently protected in New Mexico and Texas. Fear of exploitation from commercial seed collectors or a decrease in population size has prevented the publication of the exact locations of the plants. Current strategies for species recovery include protection against incompatible land use, habitat loss and degradation, and groundwater withdrawals. In 2020, the MRGESCP included recovery of the Pecos sunflower in its long-term goals.