In 1983, New Mexico State listed the New Mexico Meadow Jumping Mouse (NMMJM) as threatened. The state status of the species was uplisted to endangered in 2006. In 2014, the NMMJM was federally listed as endangered by the U.S. Fish and Wildlife Service. 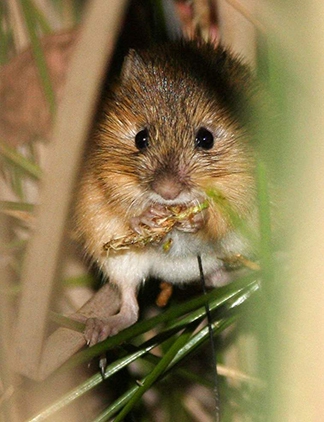 The NMMJM is a subspecies of the meadow jumping mouse (Zapus hudsonius), which is a member of a family that is only found in the northern hemisphere. The meadow jumping mouse can be distinguished from mice of other families by its long hind legs, long tail, and two-footed jumping gait. The NMMJM has a dark yellowish-brown, dark brown, and grayish-brown back, yellowish-brown sides, and a white underbody. Although, the NMMJM occurs in the same areas as the Western jumping mouse, it has been described as distinct based on fur characteristics, the absence of white ear fringe, and teeth arrangement, as well as body measurements, including mass, tail length, and right hind foot length. The NMMJM grows to about 7.1–9.2 inches in total length and has elongated feet (1.2 inches) and a long, two-toned tail (4.9 inches).

The NMMJM has a limited active period that lasts mainly through the summer, when food resources like forbs, grasses, and sedge seeds are available. This active period is typically from about late May/early June to late September/early October in high elevation areas and from mid-May to late October in low elevation areas. The jumping mouse hibernates in September or October and emerges the following May or June, which spans eight or nine months of the year. Once out of hibernation, jumping mice breed, rear their young, and accumulate fat reserves for their next hibernation period. Adequate cover and food availability late in the active season is important for survival of the species through hibernation. The NMMJM breeds in July or August and likely only produces one litter each year. Jumping mice birth 2–7 young at a time and require tall, dense riparian herbaceous vegetation, which provides the food resources and shelter necessary to successfully birth and rear pups.

It is difficult to determine the historical range of the NMMJM, as the subspecies occurs at low population densities and is rarely or unpredictably encountered. The best available summary of historical NMMJM locations marks populations in riparian and wetland areas along the Sangre de Cristo Mountains in Colorado and New Mexico, the San Juan Mountains in southern Colorado, the Jemez and Sacramento Mountains in central and southern New Mexico, the Rio Grande Valley from Española to Bosque del Apache NWR in central New Mexico, and the White Mountains in eastern Arizona. Currently, the NMMJM has a range of eight geographic management areas that are defined by current critical habitat units and the distribution of 77 populations. These areas are in Utah, Colorado, Arizona, and New Mexico, which indicates distribution of the NMMJM throughout its historical range.

The main limiting factor of the NMMJM is loss of suitable habitat due to primary stressors, like cattle grazing and lack of water, and secondary sources, like wildfire and road construction. Recovery of the subspecies requires conservation of habitat within each of eight geographic management areas in order for local populations to expand and become established. Population expansion can be fostered through the protection and restoration of connected areas of suitable riparian habitat, primarily by effective grazing and water management. In 2020, the MRGESCP included recovery of the NMMJM in its long-term goals.