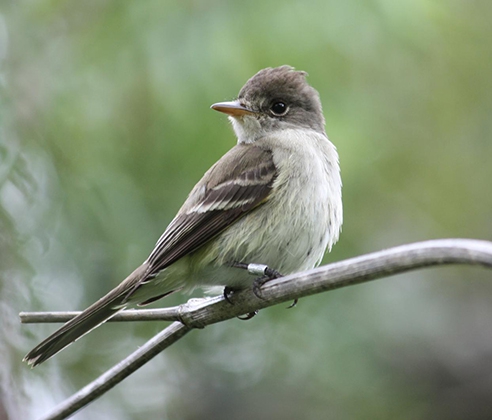 The SWFL is a small perching bird that is less than 5.75 inches long, weighing 11–12 grams. A subspecies of Empidonax trailii, one of 10 North American flycatcher species in the genus Empidonax, it shares its coloration with four related subspecies. The species has white eye-rings and olive-brown upperparts with two white wing bars, a white throat, a pale olive breast, and a light yellowish body. The males and females of the species look alike but the juveniles differ from adults by having buffy wing bars. The song of the SWFL is a distinctive sneezy fitz-bew or feech-a-bew.

The SWFL requires moist microclimatic and vegetative conditions. It breeds in dense riparian vegetation near surface water or saturated soil, which allows it to feed on insects, such as dragonflies, ants, bees, sawflies, gnats, mosquitos, cicadas, and aphids. The species will spend only 3–4 months of the year paired with a mate for the breeding season. The birds breed in suitable areas of the Southwestern U.S. and travel south to winter in Mexico, Central America, and northern regions of South America. The SWFL breeds in late spring/early summer and the female lays 3–4 eggs in late May to early June. During this time, males sometimes sing up to 30 seconds a minute, typically from the highest point in their territory. Once the eggs hatch, males sing far less frequently.

The SWFL migrates across riparian habitat in Southwestern U.S., before traveling south for winter. The species’ historic range is similar to its current distribution, but population numbers have declined dramatically over the years due to loss of riparian habitat and invasive species. The SWFL currently ranges from southern California, through southern Nevada, southern Utah, Arizona, New Mexico, and southwestern Colorado. Historically, its range also included western Texas and extreme northwestern Mexico.

The U.S. Fish and Wildlife Service implemented and completed a plan for recovery of the SWFL in 2002, when it was estimated that only 900 to 1,100 pairs existed. A study in 2007 led to an increase in the population estimate to 1,299 pairs. The decline of the SWFL is primary believed to be due to degradation and loss of native riparian habitats. One example of habitat loss is due to livestock grazing, which kills riparian vegetation that could be used for SWFL nesting. Furthermore, nonnative plant species, such as tamarisk (aka saltcedar; Tamarix spp.), has overtaken SWFL nesting habitats. Tamarisk does not provide the thermal protection for birds that native broadleaf species do. The brown-headed cowbird (Molothrus ater) also threatens the species through brood parasitism.

Bibliography of Literature Published in 2020

Photographic Monitoring of Defoliation by the Tamarisk Beetle

Bibliography of Literature Published in 2019

Bibliography of Literature Published in 2018

Restoration Analysis and Recommendations for the Velarde Reach of the Middle Rio Grande, NM

Literature Review on Water Needs of the Southwestern Willow Flycatcher

Restoration Analysis and Recommendations for the Isleta Reach of the Middle Rio Grande, NM

Restoration Analysis and Recommendations for the San Acacia Reach of the Middle Rio Grande, NM

2007 Geomorphic Summary of the Middle Rio Grande Velarde to Caballo

Comparison of Occupied and Abandoned Flycatcher Habitat at Ohkay Owingeh