The Grand Canyon region is unique and complex in terms of its geology, hydrology, and ecology:

Springs in the area support some of the most diverse habitat of the Colorado Plateau and are a critical source of water for humans, fish, and wildlife. Species diversity in these spring habitats is 100 to 500 times greater than that of the surrounding landscape2. Many of the seeps and springs in the Grand Canyon region emerge from the base of rock layers formed from dissolution of limestone from groundwater flow through joints and fractures which causes caves, caverns, and solution channels. 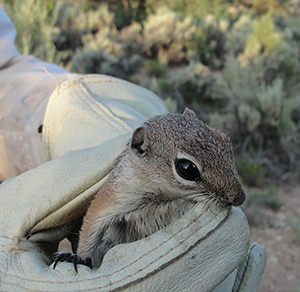 Cliff chipmunk collected outside of the Pinenut Mine. Photo courtesy of Jo Ellen Hinck, USGS.