The uranium deposits of northern Arizona are hosted by unusual geologic features described as "solution-collapse breccia pipes", or simply "breccia pipes". The region surrounding the Grand Canyon hosts hundreds, possibly thousands, of breccia pipes that were formed by solution and collapse. Breccia refers to the broken rock that fills these features, and pipe refers to the vertical, pipe-like shape of these features. Some of these breccia pipes contain concentrated deposits of uranium, arsenic, copper, silver, lead, zinc, cobalt, and nickel minerals1. Exploration in the region has shown that a small percentage of the identified breccia pipes do contain economic uranium deposits. The USGS has mapped about 300 breccia pipes in the northern Arizona region and more than 1,100 additional collapse features that may overlie breccia pipes.

Collapse structures that may be potential breccia pipes at depth have not been observed in rock units younger than Triassic age (see geologic cross section, click to enlarge cross section). The breccia fragments that form the pipes are consistently blocks and pieces of rock units found below their normal position in the wall rock; that is, all rocks within the breccia column (pipe) have fallen downward and are never found above their original level. In contrast to many other types of breccia pipes, there are no igneous rocks associated with the northern Arizona breccia pipes, nor have igneous processes contributed to their formation.

Once geologic, geochemical, and (or) geophysical indicators suggest that a breccia pipe structure exists at a site then exploratory drilling is conducted to test for uranium deposits. Since uranium deposits occur deep inside the pipe, usually several hundred feet below the plateau surface, the only way to determine if a pipe contains uranium is by sampling of the drilled material.

Most of the uranium deposits in the northern Arizona breccia pipes are high in uranium content (high-grade deposits) by U.S. Standards. Breccia pipe deposits mined or drilled during the 1980s revealed average grades of 0.42 to 1.08 percent uranium oxide (U3O8)4,5. These deposits contained about 430,000 pounds to 7 million pounds U3O8. Combined uranium production has totaled 23.3 million pounds of ore (to November 2009), including past production from the Hack 1, Hack 2, Hack 3, Pigeon, Hermit, Kanab North, and Pinenut pipes, plus the Orphan Mine6.

The primary uranium ore mineral in the breccia pipe deposits is uraninite (UO2).

The uranium mineralization is mostly concentrated near the rock units of the Esplanade Sandstone, Hermit Formation, and Coconino Sandstone; these stratigraphic horizons typically lie several hundred feet below the plateau surface in the North, South, and East Parcels. Drilling of the Pinyon Plain (formerly Canyon) pipe by Energy Fuels Nuclear found that uranium minerals extend for more than 1,600 ft vertically down through the breccia pipe7. Earlier studies of breccia pipe mineral deposits by USGS geologist Karen Wenrich identified at least two separate events of mineralizing fluids.

"The main uranium-mineralizing event apparently occurred after deposition of the Triassic Chinle Formation. A large set of U-Pb isotopic analyses from the Hack 1, Hack 2, Kanab North, EZ-1, EZ-2, Arizona 1, Pinenut, and Pinyon Plain (formerly Canyon) pipe orebodies shows that the main uranium-mineralizing event occurred about 200 m.y. [million years] ago; data from Pinyon Plain (formerly Canyon) and Pinenut pipes, however, indicate at least one earlier period of mineralization roughly at 260 Ma . Petrographic studies suggest that uranium mineralization occurred after most of the Co, Cu, Fe, Mo, Ni, Pb, and Zn mineralization; hence, these other metals must have been deposited prior to 200 m.y. ago." 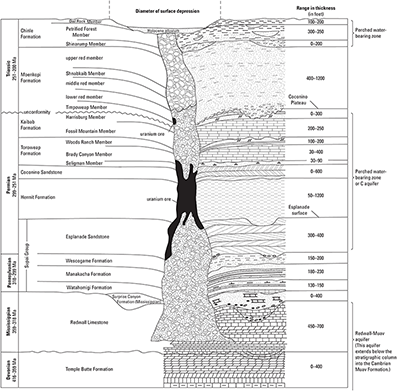 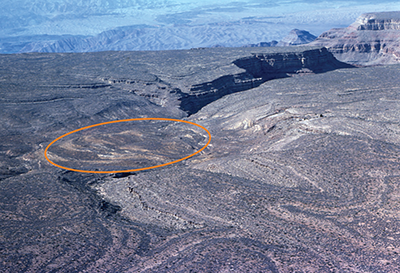 Example of a collapse structure above a breccia pipe. This is the plateau expression of the Grand Pipe, western Grand Canyon near the Colorado River and Grand Wash Cliffs. The collapse structure on the plateau surface measures approximately 2,500 feet in diameter. Note the circular rim of strata dipping inward towards the center of the collapse. Photo taken by George Billingsly, USGS. 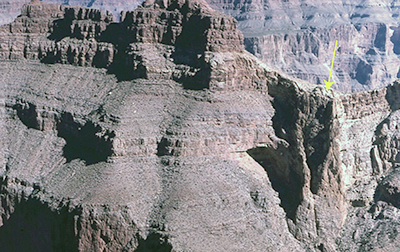 An exposed breccia pipe column (indicated by arrow) in the Grand Canyon area. Note the bending of strata toward the breccia pipe. Photo taken by George Billingsly, USGS.