Oil and gas collect in zones that generally have little connection to the surface. Development of these resources requires drilling through confining formations, pumping fluids up to the surface, separating the useable petroleum out of the fluid, and disposing of wastes. As a result, pathways may have been created that could allow fluids to move from the zone of oil and gas development activities into the zone of protected groundwater. This section describes each potential pathway for fluid movement and the relative importance of different factors.

Because chemical constituents are affected by the pathways they travel, we can use geochemical tools to determine where fluid in a groundwater sample came from and to what extent that groundwater has been affected by one or more oil and gas development activities. The same tools can distinguish between oil and gas moving through natural and unnatural pathways.

Research outside of California has shown that oil and gas-related constituents found in groundwater are often the result of movement along leaky wellbores (Jackson and others, 2013; Davies and others, 2014; Darrah and others, 2014). Current DOGGR regulations spell out well construction standards intended to keep water and oil-bearing zones separate (California Department of Conservation, 2011) and include periodic testing of well integrity. However, some wells were drilled before those standards were put in place.

Vertical oil wells are by far the most common type of well bore in California and many of the largest fields have very dense well networks. Of the 168 currently active oil fields greater than 2 square miles (mi2) in size, 31 contain more than 100 known wellbores per square mile (California Department of Oil, Gas, and Geothermal Resources, 2015). Even a small percentage of compromised wellbores could correspond to a large number of transport pathways. 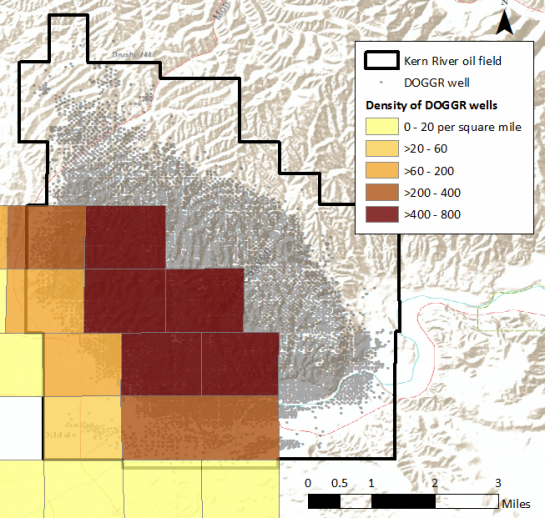 Density of oil and gas wells at Kern River oil field, illustrated in two ways - with individual dots for each well, and with a color gradient map over the southwest part of the mapped area.
DOGGR, 2015; Davis and others, 2018

The process of extracting oil from wells generates substantial volumes of co-occurring water (produced water) that needs to be managed through recycling for enhanced recovery or wastewater disposal. Historically, some of this wastewater was held in ponds next to the oil wells, and much larger volumes of produced water were collected in sumps serving multiple wells. Large volumes of produced water have been disposed of in surface pits, ponds, or sumps. The extent of past disposal is not known, but one source estimated that 570,000 acre-feet of produced water containing 15 million tons of salt was disposed of in sumps or shallow injection wells between 1900 and 1980 in southwestern Kern County (Bean and Logan, 1983). There are approximately 716 impoundments currently used by operators for various disposal practices about three-fourths of which are regulated; about 252 inactive sites were unregulated as of November 2015 (Holcomb, 2015).

Groundwater‐quality monitoring related to sump disposal is managed by the State Water Resources Control Board and Regional Boards and is not part of the COGG Program. However, water samples from sumps are needed for end-member geochemical interpretive analyses. 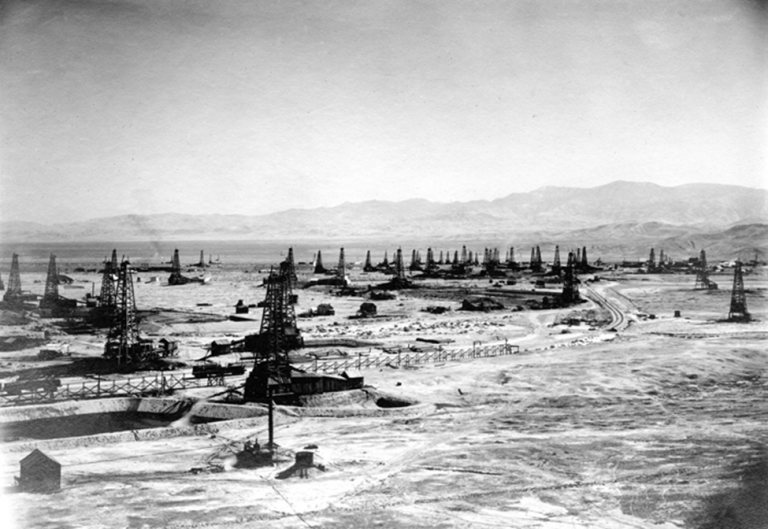 Oil production in California currently relies on the cycling of large volumes of water and steam through oil-bearing zones by subsurface injection. The figure below shows the statewide aggregated water volumes (in TAF) injected as water or steam to enhance oil recovery and as waste disposal in comparison to the volume of produced waters reported each year by DOGGR's annual production/injection databases and reports between 1968 and 2013. Injections for enhanced recovery include water‐flooding, steam‐flooding, cyclic steaming, and pressure maintenance. Well stimulation is a distinct recovery method that involves fracturing the rock matrix in order to enhance the flow of oil or natural gas. The total volume injected for this method is estimated at less than 1 TAF per year (California Council on Science and Technology, 2014).

These enhanced recovery and water injection activities are not designed to create new fractures or force fluids towards protected groundwater, but it could be hypothesized that the increased pore pressure they cause may encourage fractures when improperly located or operated (Saripalli and others, 2000; Bryant and others, 2003; Suarez-Rivera and others, 2002; Gadde and Sharma, 2001). Minner and others (2002) conducted a detailed study of this phenomenon in the Lost Hills area for the purposes of refining hydraulic fracturing operations, noting that “water injection and reservoir fluid production result in poroelastic stress changes that can dramatically alter the created fracture geometry on infill wells".

Federal Underground Injection Control regulations require operators to monitor hydrostatic pressure in injection wells to prevent pressure build up and to keep the injected fluid within the permitted zone (Environmental Protection Agency, 2001). The locations where water and steam flooding are taking place in dense well networks are tightly controlled by oil and gas developers and are in dense well networks. Water disposal wells are typically oil wells that have been converted to this purpose. 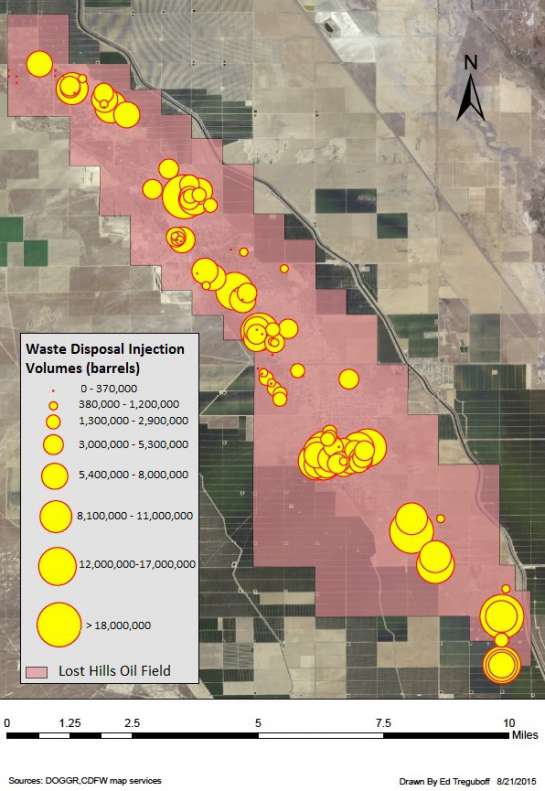 Natural pathways for groundwater contamination also exist. Oil, gas, and associated formation water may migrate to the surface along faults and fractures; factors which control and enhance this flow are complex. Eichhubl and Boles (2000), for example, describe processes controlling fluid flow along faults in the Monterey formation.